Dancing with a Significant Other

What's it really like to dance with your significant other?

Hubbard Street dancers Michael Gross and Adrienne Lipson work together on a daily basis, rehearsing and performing together, but they also have the privilege of going home together at the end of the day. This Valentine’s Day, we sat down with this real life couple to find out, what’s it really like to dance with your significant other?

How long have you been together?

Did you meet through the company? Can you give us a little background on how your relationship began?

Michael Gross (MG): We had met once before in passing before joining the company. But then we met again when I joined the main company and she was in the second company, HS2. There wasn’t much overlap between main company rehearsals and HS2 but we did get to spend a little time in the studio together during The Art of Falling (Hubbard Street’s collaboration with The Second City). I actually ended up asking her out via Facebook Messenger.

Is it easier or harder to partner together as opposed to someone else in the company?

AL: The intimacy, for example if we had to kiss on stage that would be easier because we have a familiarity with each other, but it can get personal really fast. When you are working with someone you aren’t in a relationship with, you have this level of politeness and courtesy that you maintain and you are a lot more careful socially.

MG: When we are working together it can get a little heated sometimes because we don’t hold back. That filter goes away.

You two live together. So how do you separate your work life from your home life?

AL: We don’t. I’d say, as a couple, it’s one of the things we are working on. But there are days at work that we sometimes don’t even see each other. So, if anything, the going home is when we can actually relax and hang out together.

MG: When we are at work we are trying to focus on work and we try not to isolate ourselves from other people or say cuddle on the floor. We try to be professional in the workplace, so when we go home we can be ourselves.

Is there any piece in Hubbard Street’s repertoire that you two especially enjoy dancing together? 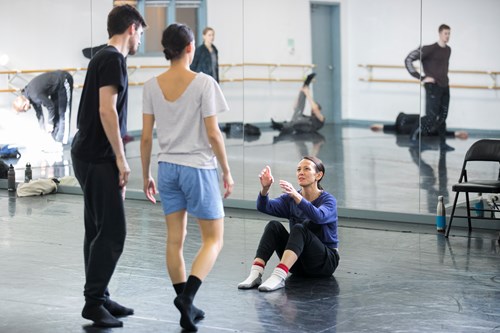 MG: I really liked doing Robyn Mineko William’s Cloudline together. I think a large part of that is because we were both part of the creation process so there’s an ownership not only individually but together as well. It is, in my mind, ours. It’s like our little secret duet. It’s not necessarily the story of our relationship, but it still feels like it’s our story.

AL: Yeah, even though there are other casts it feels special for us. Even though, like we said earlier, there can be some tension in the rehearsal process, on stage all of that melts away. The duet is just tender and sweet.

What’s the best part about working together on a daily basis?

AL: It’s nice when I’m having a hard day or feeling down, he’s just there. Sometimes after a particularly difficult ballet class, we will just hug for a second in the hall and it’s not a big deal, but it’s just nice to have someone that you know will always be there for you. Because we have this shared experience, it also made the process of getting to know him pretty fast and it made it easier to get over the initial stages of being nervous and just be able to be comfortable with each other as people.

MG: For me, I like having someone that you don’t have to explain your entire day to. If I say that it was a hard day or that I feel like I didn’t dance well, she knows exactly what I’m talking about and she knows exactly how I feel. Because we both go through the same things on a daily basis there’s this compassion that is real and really easy. You don’t have to explain it.

Anything else? Or any funny stories?